Overall when it comes to reading advice on being single, dealing with men and dating/relationship advice, it normally goes in one little ear and out the other.

Which the fact that I don’t pay much attention to any of these is most likely my problem today.

I just prefer to let life be the real teacher. Nothing can teach you like the experience of your own. And from random conversations with that one aunt.

While being told that wearing more camisoles and brightly colored cardigans will make you appear more friendly and less intimidating to latch you a man are eyeroll worthy, the advice columns about break-ups are usually the ones that are the fucking worst. Sure, some can be inspiring or thought provoking, but then there are others that troll in with advice like:

SPILL ALL THE DETAILS OF THE BREAK-UP

TAKE A SUPER WILD TRIP WITH YOUR GIRLFRIENDS

and the goddamn Nickelback worst:

GET UNDER A NEW GUY TO GET OVER THE OLD ONE

Now, I almost wish that this person that recently made news read at LEAST that hot mess bundle of advice, because she clearly didn’t read the ones that were for sane people. Let’s just call her….Felicia. 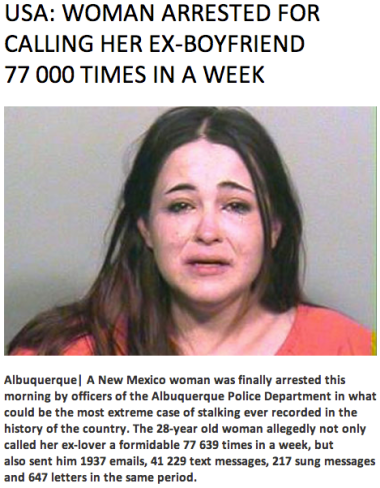 You should call NO ONE 77,639 times in one week. NOT. ONE. SOUL. Not work related people, not your mama, not your amazing sibling, not Jake from State Farm, not your best friend from childhood, not Tyrone, not your fabulous friend that gets even more fabulous after they’ve have a few cocktails, not the pizza place, not even on Jesus. He has enough on his plate, sis.

Clearly you never read a break up tip post-it let alone an actual column, or owned an Beyonce‘ album, or had a heart to heart with someone or been forced to watch He’s Just Not That Into You with a girlfriend on a drunken Saturday night.

So, thanks for the inspiration on breaking this down, and this is for you Felicia.

YOU’RE GOING TO GO A LITTLE OFF THE RAILS

ESPECIALLY if you own a vagina. It’s in the cells. 41,000 text messages worth?–definitely not–but at least one “WHAT DID I DO WRONG?” is going to fly out.

This is why phones should NOT be allowed on nights out.

Give yourself a moment to take in the fuckshit that just happened to your existence. Cry. Be angry. Be confused as hell. Burn some pictures, donate their leftovers to Goodwill and just be sad. Detox it out now before you get it out later.

Most likely post relationship alone time isn’t the first option wanting to take. Take a trip back home, visit loved ones, or just have a weekend in with a best friend. Even if it is to watch you be an emotional wreck.

DO NOT LISTEN TO DRAKE, ADELE, OLD SCHOOL ANGRY ALANIS, LANA DEL REY OR ANYONE ELSE IN NEED OF LEXAPRO 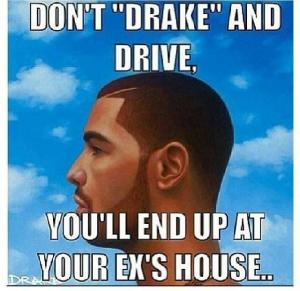 Felicia you definitely owned all of Drake’s albums.

To get past the bad, you have to focus on the good. Spend a little alone time to sit down and make a list of everything involving around you. Who are you? Who do you want to be? What do you want to do? Reflect and write it all down, every little thing you want to accomplish or work on for the next future months. You want to travel?–get a game plan together–budget, price, plan. That purse you’ve had your eye on you finally decided you want to purchase to brighten your spirit?, buy it boo. You want to move out of your place because it holds too many memories?–search real estate, work harder, save your coins, and get the hell out. Stack and attack.

NOT in a literal sense, don’t get no ideas Felicia.

But since the fact that you and your boo are over, they’re over. Non-existent. Irrelevant.

And so is the old you. At least the parts you picked and over analyzed at throughout the course of the relationship (because you will).

i.e, You felt you complained too much? Work on stopping being a Complaint Cathy and focus more on being more positive. Have nothing nice to say at that moment?–chew some bubblegum.

Surround yourself with anything, anyone and everything that puts a smile on your face. Stay in the company of positive, productive people. Read a favorite book. Watch an episode of Jerry Springer and realize your life could be worse. Take a ride to the beach. Get your weave done. Watch a video of puppies. Eat some of your cousin’s homemade cookies.

STOP OVER ANALYZING AND OVER INDULGING IN THE BREAK-UP

You’re on the road to recovery, you don’t want to keep reliving the same mess over, and over, and over again. After the initial news is out to whom you choose to reveal, don’t stay on the same topic of discussion. People will mostly likely try and pry, and that’s for you to shut that shit all the way down.

Avoid it. Take a break from it, at least temporarily.

Don’t publicize. Change your relationship status on the mode where only it’s announced to you and not your entire news feed. Unless you want to answer to all of your friends and nosy ass classmates you haven’t talked to in years who suddenly care about your life why you’re rolling solo.

Delete, block or ignore. Ditch the albums, remove the tags, delete the source of the heartache. If you’re strong enough to not go as far as unfriending, at least unfollow or simply don’t keep up with their feed.

They don’t exist anymore, remember? That’s their spirit hacking into their account, and we’re not ghost whisperers so……moving on.

Realize your ex is 85% chance going to act like a stunt queen. They’re going to be out, acting out, posting more shit, and hanging out with new girls/boys. And you better not entertain a single damn show.

When you’re focused on your own grass, you’re too busy to notice if someone else’s is greener.

Go back to school.

Dive 100% into your hobbies. Hell, even start your own business for it.

Take a class. Learn a new language, an instrument, or a skill you’ve been putting off.

Hit the gym. It’s hard to be sad when you have washboard abs.

Thot: A Thot is a hoe. Plural: Thotties.
i.e, “Getting under a new guy to get over an old one”.

WHEN YOU ARE READY, ACCEPT THAT YOUR NEW DATING LIFE MIGHT BE A MESS

NO VACANCIES FOR BULLSHIT

Like most things, break-ups take time. Healing takes time. But eventually, it does come and you’ll come out better because of it.

And if the culprit who broke your heart happens to try and check into the Hotel Fabulous that is you, send their ass with packed bags, chile.

Unless you have a thing for shitty sequels, we know how that story ends.

And with all of this, I’m done ma’am.